Below you will find resources and documents related to the 2022 Nebraska District LCMS Convention, held June 24-25 at the Younes Conference Center in Kearney.

Rather, speaking the truth in love, we are to grow up in every way into him who is the head, into Christ, from whom the whole body, joined and held together by every joint with which it is equipped, when each part is working properly, makes the body grow so that it builds itself up in love. Ephesians 4:15-16 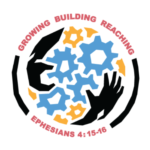 This logo suggests the tactile nature of a fully human Savior with the use of semi-anatomical correctness and gaping wounds in His hands. The gears are jagged and crude, suggesting human frailty and our insufficiency without the guiding, saving work of our Lord.

Building Together. In Christ. For Mission.

Summary Sheet for Delegates and Congregations

$4,421 designated to support of campus ministry in the Nebraska District

Nominations from the floor

#1.08 Amended as #1.08A To Reject All Forms of Racism and Affirm Our Witness to All People

1.01 To Update the Nebraska District LCMS Articles of Incorporation

1.02 To Update the Bylaws of the Nebraska District

1.06 To Encourage The Lutheran Church—Missouri Synod’s Mission and Ministry Emphasis of Making Disciples for Life

1.07 To Establish Term Limits for Elected Officers of Synod

1.08 To Reject All Forms of Racism and Affirm Our Witness to All People

1.09 To Address the Use of Aborted Babies in Creating Vaccines and Other Medications

Omnibus, Responsibility Assigned to Others

Three of our pastoral delegates have shared concerns about the proposed standing rule that would call for polling the advisory delegates prior to Convention votes on resolutions and significant proposed amendments. I appreciated hearing from them and think this provides an excellent opportunity to address them.

Over the course of Synod’s history we have faced the frustration of our commissioned workers’ roster status which does not present them with the opportunity to serve as voting delegates to our conventions. That frustration came again to the 2019 Synod Convention. Resolution 9-17 requested a full study of this topic, with recommendations for the next convention. The full 9-17 report from the Committee on Voting Privilege in the LCMS is available on the Synod website.

The report notes the valuable aspect of our commissioned workers in our ministry together, but states that the foundation of our representation at conventions is congregational, with each congregation allotted two delegates: one clergy and one lay. Though the report does not open the possibility of voting for our commissioned workers, it does encourage several important venues for involvement:

The first three have been encouraged in the past. This final recommendation has been the practice of the Northern Illinois District for at least the last 18 years. As the report mentions, this is one way to give a voice to our advisory members. At least two other districts, Pacific Southwest and Michigan, have included this in their standing rules this summer. North Wisconsin and Florida-Georgia have resolutions to implement the practice.

In the Nebraska District we have 219 active pastors and 235 congregations. We have 779 potential advisory delegates, but only 69 are currently registered to attend the District Convention. This group of advisory delegates includes ordained workers (CUNE staff, those with candidate and emeritus status, and pastors from congregations with multiple pastors on staff), commissioned workers (active, candidate, and emeritus), as well as non-voting lay delegates from multi-point parishes. In recent history we have averaged between 80-100 advisory delegates in attendance at our District Conventions. The proposed standing rule is designed to encourage greater participation and show the value of their opinion.

This advisory poll should not be seen as a directive to the voting delegates. The Word of God gives us primary direction and guidance. Floor committee rationale, floor debate, and advisory polling are all designed to help delegates make a reasonable decision.

It should be noted that this is proposed as an inclusion in our standing rules which can be debated and must be adopted by the Convention before it is enacted.