Lutheran schools have been a prominent feature of The Lutheran Church—Missouri Synod since its formation. Before public schools were available and before Sunday schools were popular, each LCMS congregation was expected to operate a school if it was to become a member of the Synod. The congregations of the Nebraska District continue this strong tradition of Lutheran education, with 34 free-standing daycare and preschool centers, 30
elementary schools, and 4 high schools.

Messiah Lutheran School in Lincoln has a history of Lutheran education that pre-dates its history as a congregation. The school was built in 1974 by the members of Calvary, Lincoln, and eventually Messiah became its own,
separate congregation and school. The congregation’s commitment to quality education has always been central to its mission.

As the city of Lincoln grew around Messiah’s campus, they knew they needed to make a choice: stay where they were and build, or move and start over? They put the question to the congregation for a vote and the members overwhelmingly agreed that Messiah was right where God wanted them to be. They would stay at their current location and build a new school facility. 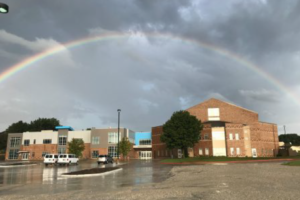 The updated facility includes classrooms with optimal floor plans, storage, and technology; an updated kitchen for school meals; and space for ministry activities throughout the week. Director of School Ministry Matt Stueber described the new classrooms as clean and “student focused, student centered…up-to-date, and consistent, all the way through.” He added that the one thing the school’s teachers did not want to lose from their old, open classroom design was the sense of collegiality and fellowship, so the design plan put commons areas in the center of groups of classrooms.

With the new, larger classrooms, Messiah has been able to hold in-person classes this semester despite restrictions due to the COVID-19 virus. Matt Stueber notes that if they were still trying to hold classes in the old facility under the current health directives, “we wouldn’t be able to have all of our kids in school today.” Currently, the school is not open to anyone except staff and enrolled students, but once health restrictions have been removed, the school will be used as a multi-ministry space. It will be a place for “Wednesday Nights at Messiah,” when their midweek Bible study groups and discipleship classes meet, along with other future church events.

Building projects always bring upheaval and inconvenience, and there was some concern about how the project would affect their relationship with the school’s neighbors. One nearby family, though, contacted the school to say that they appreciated the way Messiah managed the project and caused as little disruption to the neighborhood as possible. Senior pastor, Rev. John Kunze shared, “I had a long conversation with [a neighbor] on the phone, and…he appreciated throughout the building process that we were really good neighbors. That it was not a hardship for them as neighbors. But even more importantly than that, he said, ‘Based on your reputation and also, now with this
amazing new building, our kids are going to be raised Lutheran.’”

Funding for the $8 million construction project came from the congregation’s “Forward in Faith” capital campaign and a construction loan from Lutheran Church Extension Fund (LCEF). Nate Meier,
Nebraska District LCEF Vice-President said, “In this effort, LCEF recognized that Messiah was building upon their legacy as a strong church, school, and childcare ministry and at the same time charting a bold course forward for the future. LCEF is proud to be a partner in this ministry expansion, and we’re excited to see this effort enhance Lutheran education in Lincoln.”

Take a virtual tour of the school at https://messiah4u.org/.