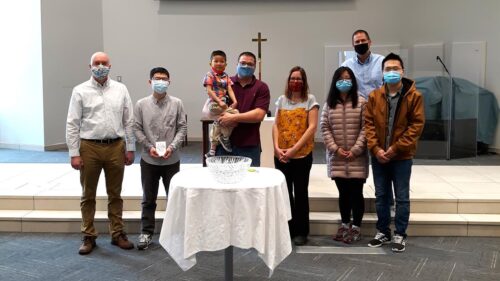 You might have heard the story about a man whose boat sank while he was sailing on the ocean. Fearing he would die, he prayed that God would rescue him. While he was praying, he refused an offer of help from three passing boats because he was waiting for God’s help, and then he drowned. When he was standing before God in heaven, he asked why God didn’t rescue him. God replied, “I sent you three boats!” A PhD graduate from China studying at UNL shared this story as he prepared to be baptized at University Chapel in Lincoln this winter, and explained that he realized God had been sending “boats” to rescue him for years now, and it was time for him to listen.

When the COVID-19 pandemic shut down college campuses across the state, many international students stayed on campus and continued their studies online. One of them was this Chinese student, who was connected to the ministry at the University Chapel, but who was not a believer. Chapel staff connected him with a conversation partner volunteer, DCO Matt Myers of Seward. The student made it clear that he didn’t just want to practice English—he wanted to study the Bible. The two of them began to read through the gospels of John and Luke together, and God used this time to grow faith in his heart.

After months of discussion, study, and prayer, this student from China recognized his need for baptism, and decided to do so at the Chapel before moving to another state for work. As he gave his testimony, he said he was not “an emotional guy,” but that when he read the account of Jesus forgiving Peter after denying Jesus, he was deeply moved by the forgiveness that Jesus offered. He recalled a connection he had with Christians in his home town in China, then learning about Christianity at the Chapel, followed by his studies of the Gospel with his conversation partner, and he realized that God had been preparing him for faith for a long time.

Another student named Rebecca was confirmed on a recent Sunday at University Chapel. She began meeting on Tuesdays with Pastor Bill Steinbauer (first via Zoom, later in-person) more than a year ago. Together, they went page-by-page through the Small Catechism. Rebecca came with questions. Meeting with Rebecca, Pastor Bill reports, was a highlight of his week. “Students engage because they are motivated and they have just enough life experience to really care about the questions they are asking.” Rebecca’s confirmation that Sunday at the Chapel was a celebration.

COVID-19 may have changed the way campus ministry happens, but it hasn’t shut it down entirely. Those involved in campus ministry in Lincoln, Kearney, Omaha, and Wayne have conducted Bible studies by Zoom, met for distanced fellowship and activities, offered counseling for students experiencing anxiety and depression, and have done all they can to keep students connected and growing in their faith. Despite the challenges of three unusual semesters, campus ministries in Nebraska have seen new students get involved and ask to be baptized, continuing students become more mature in their faith, and have even been blessed to hold weddings.

As high school students in your family and congregation prepare to graduate and move away for college this summer, encourage them to stay connected to their faith through Lutheran campus ministry. Learn more about getting them connected on our website. If you are interested in becoming an English language conversation partner for an international student, please contact Mark Meyer at mark@lutheranchapel.org to learn more.